So, did you miss me?

For some reason, when life gets tough, the not-so-tough stop blogging, writing prayer letters, and communicating in general while we curl up in a ball for a while. Or maybe it’s just the introverts among us. Probably that was too sweeping a generalization. Maybe it’s just me.

Anyway, I’m back and dipping my toes in the water again, so bear with me until I get my momentum back. Unfortunately, I lost a lot of photos when my laptop was stolen during the middle-of-the-night burglary of my home last December, but I have some that were still on my camera or else taken since then, so here’s an update on a few things that have been happening around here.

In November the Compassion projects in the area got together for a Sports Day. 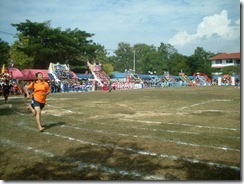 Each team had their own cheering section. The ones in pink are our kids from  Huay Krating.

This is the group from Mae Ramat. Sadly, this project will be closing in June. 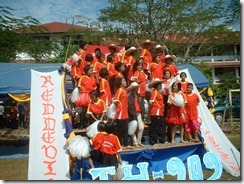 Just before Christmas, the churches in the Mae Sot area got together for a parade to celebrate Christmas and the King’s birthday. 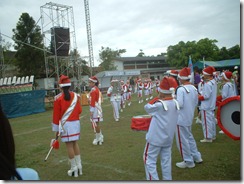 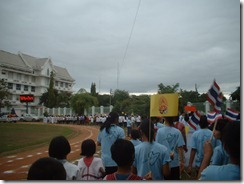 Brace yourself for this next one, folks. 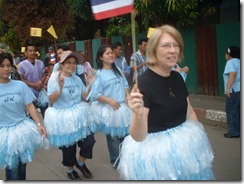 Yes, that’s me in a blue hula skirt—very Christmas-y, I know.

I think that’s enough excitement for one day’s blogging. I hope to be back soon with more unless the procrastination monster overcomes me again.

After the grand entrance of my first blog post back at the end of March, I had great hopes that this time, I would be writing on a regular basis. It came as no surprise to me, however, that due to the vicissitudes of life and a lifetime of honing my skills in the art of procrastination, my second post only makes its appearance now after more than two months. Not that anyone reads this thing, but still…. The longer I waited, the harder it was to get going again.

What to do? I had three choices:

Number one was just not going to happen. After doing #2 for a while, I proceeded to option #3, whereupon I realized that my former tag line wouldn’t fit in the space without leaving a poor orphan word on the 2nd line. Which looked pathetic.

So I spent some time thinking about what my new tag line should be. Of course, it should be a reflection of what the blog is, but who knows what that will be at this early stage. After a while, I came up with the tag line as it appears above which expresses something I’ve been thinking about.

This might sound weird (or not if you’re an introvert), but I sometimes think of myself as being invisible. Not in the having-a-super-power way. Just in the feeling that somehow I am a little removed from what is going on around me. I have a tendency to blend into the background and observe more than participate. I’m always surprised when someone remembers having met me, because I assume that I have not been noticed, and most of the time, I’m good with that.

But it’s not true. I’m not invisible. No one is invisible. We have an impact on people whether we know it or not. We have the power to dampen someone’s good mood, or conversely, to bring a ray of hope into a needy person’s life. It’s a solemn responsibility.