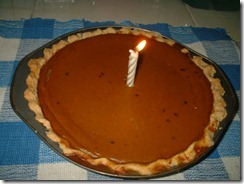 Today is my birthday AND Thanksgiving Day! There is something very special about having a Thanksgiving birthday and this is my year. It comes around just often enough to be somewhat predictable, but is not to be taken for granted.

I don’t remember my first Thanksgiving birthday since I was only four years old then, but by the time time it rolled around again when I was nine, I knew how special it was and asked for pumpkin pie instead of a birthday cake. I wouldn’t be at all surprised to hear that other people do that, too. Thanksgiving fell on my birthday again when I was fifteen, but then there was a gap of eleven long years between that one and the next. How did that happen?

Sadly, it happened again in 2000 and is all set to do it again in 2028. I’ll be pretty old by then. I wonder if I’ll still have the energy to muster the requisite outrage. I bet I’ll still order pumpkin pie though.

Heads up, all you people with November 23rd birthdays. You may be thinking, “Oh goodie, Thanksgiving is on the 24th this year, so in 2012 it will be on my birthday”! Not so. I regret to inform you that 2012 is a Leap Year. It is going to leap right over your birthday and you will once again be gypped out of your T’Day B’Day.

Just in case you think I have mad math skills (sorry, I just can’t bring myself to spell it with a Z) or have a phenomenal memory, neither of which is true, this is where I got my info on Thanksgiving dates.

And yes, I did make my own birthday pie shown in the photo above. It’s not pretty, but keep in mind that the local stores in rural Thailand don’t carry Libby’s canned pumpkin, so it started out like this: 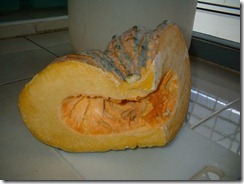